View the preview or purchase the book.

Watch our videos that tell the history of Opals.

How to tell the difference between each opal variety.

Opal - the most valued of all gems 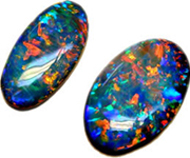 Opal derived its name from the Roman “opalus” which means “to see a change in colour”. The ancient Romans popularised opals more than two thousand years ago, when opals were found at Czernowitz, a mountainous region of Slovakia, which was at that time part of Hungary.

Pliny the Elder wrote the inaugural Natural History of the World, which was first published in 77AD. In this most important publication he wrote that opal is the most highly prized and valuable of all gemstones in the empire.

Although Pliny suggests opal came from India, it did in fact originate in Hungary.

Pliny wrote: “For in the opal you shall see the burning fire of the carbuncle or ruby, the glorious purple of the amethyst, the green sea of the emerald and all glittering together, mixed after an incredible manner. “Some opals carry such resplendent lustre with them that they are able to match the bravest and richest colours of painters: others represent the flaming fire of brimstone, yea and the bright blaze of burning oil.“

Pliny also wrote that opals achieved the greatest price because of their rarity and their beauty. He writes of “Those who have written books of precious stone have given unto them the name and glorie of the greatest price.”

Commenting on the value of opals, he indicates that, then as now, it was women who set the value of gems: “Thus far I have written of gems and precious stones which be esteemed principally and most rich, according to the decree set down and pronounced by our nice and costly dames.”

Opal has been used in the crowns of kings. The crown jewels of France and Hungary included fine specimens of opal. The crown of the Holy Roman Emperor contained an opal stone. Napoleon presented his Empress Josephine with the “Burning of Troy”, a magnificent opal with brilliant red flashes.

Queen Victoria became a lover of opal and wore opals throughout her reign. Her friends and five daughters were presented with fine opals. Opal became highly sought-after because the Royal Court of England was regarded as the model for fashion around the world.

It was not long before famous designers such as Tiffany, Lalique and Cartier began using opal extensively in their jewellery.

In 1889 a new source of opal was discovered in far-off Australia producing the finest opal the world had ever seen. Australia’s vibrant opal industry began with pioneering opal miners who worked (and sometimes died) in the remote Australian outback.

In 1889 pioneer Tullie Wollaston set sail for England with a parcel of Queensland opal.

London gem merchants were unaccustomed to the brilliant Queensland gems and refused to purchase them. Wollaston persisted until the firm Hasluck Bros, of Hatton Garden, agreed to trial the stones in Europe and America . Before long Australian Opal had been introduced to famous jewellery houses that began to feature opal in their designs, these included Tiffany, Lalique, and Cartier. Wollaston established many markets for Australian opal. He died in 1931, a wealthy man.

Australia now produces around 95 per cent of the world's opal supply. Australian opal is prized the world over, thanks to the pioneering efforts of Tullie Wollaston.